At the end of 1990, the largest cache of late Bronze Age axes ever found in Belgium was unearthed in a field in Heppeneert, near Maaseik. The objects, which must date back to the 8th century BC, include at least 47 axes and a spear head in bronze, although other objects may still be buried in the ground. The King Baudouin Foundation purchased the collection in 1995 to prevent it from being broken up.

The axes excavated in Heppeneert were used at the end of the Bronze Age and bear witness to the technological perfection of the flat axe heads common at the beginning of this period. They represent the outcome of man’s continued efforts to improve the manner in which the metal part of the axe was attached to the curved handle.

The axes found in Heppeneert are of the Plainseau type, found mainly in northern France. This designation evokes the bronze industry that was flourishing in the Amiens and Picardy region. Plainseau-type objects were also exported to as far afield as southern England, the Netherlands and Belgium. Apart from small, isolated finds in the valleys of the Meuse and the Escaut, small deposits were also discovered in places such as Hoogstraeten, Antwerp, Lanaken and Eprave. Other deposits have revealed a wide variety of objects characteristic of Plainseau culture including jewellery, weapons and tools.

It is interesting to observe that caches of this type are most often found in wetlands, such as riverbeds, close to fords or in former marshlands. In prehistoric times, the plain of Heppeneert was a meander of the Meuse, so that a religious or ritual explanation is thus a possibility. However, as some of the caches included products that were finished but had never been used, this leads to a conclusion that they were stockpiles. In recent years the explanation has been that these caches were rather a complex system of social competition, whose aim was rather to prevent the spread of luxury and prestigious products and thus maintain their exceptional nature. 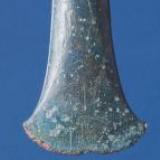