The Gallic Treasure of Thuin

This Celtic treasure, comprising 70 gold coins discovered in Thuin, is of exceptional archaeological and numismatic interest, since previous remains of the Gallic civilization in this part of the world had been rare, fragmentary and rather unspectacular. It was therefore of no great surprise that the King Baudouin Foundation purchased this Gallic monetary treasure when the opportunity arose.

The coins were accidentally discovered in 1980 on the south bank of the valley of the River Biesmelle in Thuin (Hainaut), dispersed over an area of 3 metres by 1, at a depth of 30 to 40 centimetres. In previous times, before banks existed, it was not rare for people to bury valuable objects, sometimes after the sudden death of their owner and they remained hidden and forgotten for thousands of years.

The treasure of Thuin comprises 70 staters, all of the same type. Of Greek inspiration, the coins could be used to pay salaries, or as gifts offered by Gallic chieftains as a means of assuring their popularity and power, as a dowry or even as a religious offering. The coins, which were minted and not cast, weigh between 5.8 and 6.8 grams and contain around 55% of gold. The remainder of the alloy is copper and silver. 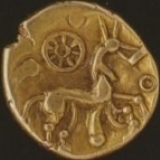 Research and publication on the Gallic numismatic treasure of Thuin
news