The Treasure of Oignies

In 2010, the Sœurs de Notre-Dame de Namur donated the Treasure of Oignies to the King Baudouin Foundation. This splendid treasure of silverware, mainly religious, dates from the 13th century and includes some fifty pieces made by Brother Hugo d’Oignies and colleagues in his workshop.

A high degree of refinement

The high degree of refinement and technical mastery of the pieces, the rare and precious materials used, the excellent state of conservation and the particular history of the treasure have given it an international reputation. In 1978, the treasure was classified as one of the Seven Wonders of Belgium and in 2010 thirty-two pieces were listed by the Fédération Wallonie-Bruxelles as exceptional moveable cultural heritage.

The priory of Oignies

Brother Hugo and his colleagues made most of the objects between 1228 and 1238. They worked in Oignies, a small town between Namur and Charleroi, as members of the priory founded in 1198 by the brothers Gilles, Robert and Jean de Walcourt. The priory became a place of pilgrimage following the arrival of Marie de Nivelles at the Beguine convent attached to the priory. This aesthete and mystic impressed her contemporaries with her visions and ecstatic experiences. Her spiritual inspiration fascinated Jacques de Vitry, a brilliant theologian and chronicler who was to become Hugo d’Oignies’ main patron. Throughout his life, Jacques de Vitry sent reliquaries, precious stones and rare objects to the priory.

Exceptional in every aspect

The Treasure of Oignies is a testimony of extraordinary quality to Gothic silverware. Hugo used many of the techniques employed by contemporary silversmiths and particularly those used by his Mosan colleagues, amongst whom he worked. He used niello, filigree, chasing, repoussé and stamping. It is without doubt the highly elaborate but perfectly balanced marriage of niello, filigree and malleable shapes that were cast or worked in repoussé, sometimes polished, that conferred on his work such a remarkable sense of harmony. Indeed, it is the lightness, softness and personal creativity in his work that marks Hugo d’Oignies out as a real innovator and the creator of an exceptional ensemble.

This treasure tells us about the context in which it was created, the lifestyle of the Middle Ages and, thanks to the chronicles of Jacques de Vitry, in particular about relations with the Middle East. Jacques de Vitry was sent on the crusade against the Albigensians in 1213 and it was from this region, where he lived between 1216 and 1226, that he dispatched a quantity of reliquaries, precious stones and other elements to the Priory of Oignies, where they would be used in the pieces of silverware created there.

In 1818, after the destruction of the priory during the French Revolution, the treasure was entrusted to the Sœurs de Notre-Dame de Namur. Now, it is up to the King Baudouin Foundation to ensure that this inestimable ensemble of silverware is safeguarded. The treasure has been entrusted to the Musée Provincial des Arts Anciens du Namurois, where it is now exhibited, whilst the Société Archéologique de Namur has undertaken to contribute to research and promote this important part of our heritage.

Publication « The Treasure of Oignies » 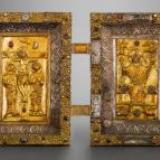 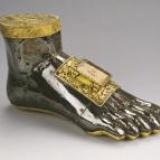 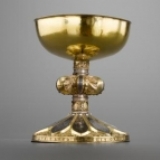 Call for contributions to the International Medieval Congress
news