In 2011 the King Baudouin Foundation’s Heritage Fund acquired an exceptional collection of 32 musical manuscripts that belonged to the eminent Belgian composer Henry Vieuxtemps (1820-1881). They include 22 manuscripts handwritten by Vieuxtemps, 12 of which have never been published. The manuscripts were purchased following the recommendations of Marie Cornaz, conservator of the music collection at the Royal Library of Belgium, and the purchase has enabled the archives to have been kept intact.

A brilliant violinist and composer

Henry Vieuxtemps was born in Verviers and was known worldwide, from a very young age, as a violin virtuoso. He toured throughout Europe and gave concerts in Russia and America. Vieuxtemps was not just a celebrated violinist; he was also a brilliant composer; he also taught the violin at the Brussels Conservatory and was an important founder of the Belgian school of violin, which became hugely successful. Eugène Ysaÿe was one of his students. Since 1922, the Henry Vieuxtemps Violin Competition has been organized in Verviers, a prestigious competition that has gained international renown..

The archives, which were cared for in France by Henry Vieuxtemps’ heirs prior to their acquisition by the King Baudouin Foundation, contain a mine of information about the composer. In addition to a large part of his work, they also contain work from the various periods that marked out his career and the different stages of his creative process, including a number of hitherto unknown works.

The 32 manuscripts have been loaned to the Music Department of the Belgian Royal Library, where they will be the subject of scientific research and will eventually be able to be consulted, as is now the case for the operatic musical collection of Yves Becko, which the Foundation also entrusted to the Library in 2005. We also look forward to the first public performance and recording of these unpublished works. Website of the Belgian Royal Library Virtual exhibition Further information about the Heritage Fund 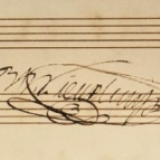 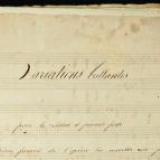