The Liege painter and engraver Armand Rassenfosse (1862-1934) made a mark on his period. In collaboration with Félicien Rops, he developed the technique of soft varnishing, re-baptised « Ropsenfosse », which made a significant and innovative contribution to the art of engraving.

Rassenfosse is among the greatest Liege artists of his time. Working closely with the Bénard printing house, he created an impressive number of posters. His most remarkable commission was illustrating Charles Baudelaire’s Fleurs du mal. At the end of his career, Rassenfosse turned to painting too. Woman in her intimacy was his favourite subject, but he also enjoyed painting various aspects of his own social life.

It was another famous son of Liege, his friend the architect Paul Jaspar (1859-1945), who designed Rassenfosse’s studio-home at 366, Rue Saint-Gilles in Liege. For the furniture, he called upon another friend, Gustave Serrurier-Bovy (1858-1910), who designed a number of pieces especially for Rassenfosse. The studio and the living quarters formed two distinct parts. Rassenfosse worked there and he and his family lived there for thirty-five years. Still today, we can imagine the hive of activity in the house, where the creative people of Liege gathered to exchange ideas. The house is characterized by a combination of traditional Mosan architectural elements as well as modern features. The building is the oldest and most convincing testimony to Liege regionalism, which witnessed its hour of glory during the reconstruction period that followed World War I.

Claire de Rassenfosse, the artist’s granddaughter, bequested the house and its contents to the King Baudouin Foundation. It has been a listed building since 20 February 2009. Around one hundred works, including paintings drawings, engravings and posters, among which are several emblematic pieces, are also part of the bequest she made to us. Further information about the Rassenfosse Fund 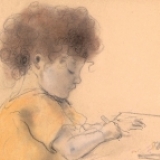 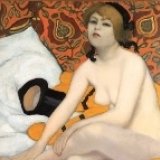